Investing in the Next Generation of Young Black Entrepreneurs 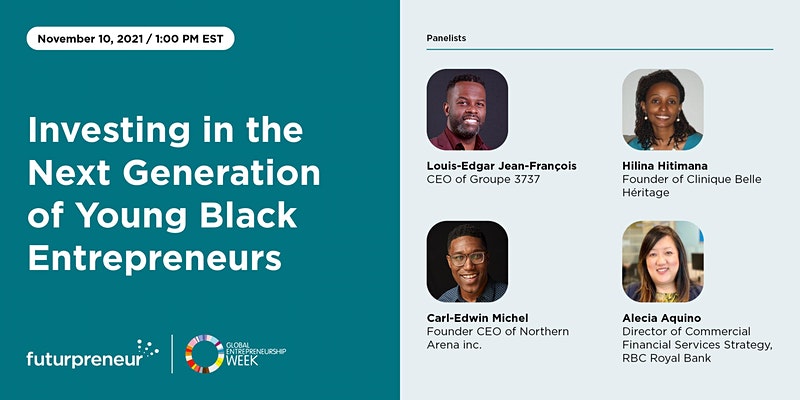 First on the panel: Louis-Edgar Jean-François, CEO of Groupe 3737, will share the steps to take to make your business idea a reality, and demonstrate the important work Groupe 3737 has been doing in Quebec and throughout Canada. Next, we’ll hear from Hilina Hitimana, founder of Clinique Belle Héritage, who launched her dental clinic while finding ways to give back to her community. Alecia Aquino, Director of Commercial Financial Services Strategy at RBC, will share ways for organizations to be more intentional about their diversity and inclusion values, and shed light on why it was important for RBC to make a difference. Last, but not least: Carl-Edwin Michel, Founder and CEO of esports event organizer Northern Arena inc., will share his entrepreneurship journey and his thoughts on diversity in the tech and gaming industry, as well as his words of wisdom for young entrepreneurs.

It’s time to get inspired!

Jean-François is the CEO of Groupe 3737, a synergic ecosystem focused on creating economic growth and social impact through diversity and inclusion in Black communities. Throughout his career he has been a member of the Quebec CPA Order, head of consolidation of Bombardier Aeronautique and chief accountant of RDS. In 2009, he combined his experiences and founded multidisciplinary accounting and legal services firm LEJ, which has experienced tremendous growth following his arrival in the G3737 ecosystem. His objective is to help other companies and organizations to experience similar growth, promoting economic, social development and large-scale job creation. Since 2009, Jean-François has worked almost exclusively with entrepreneurs and founders. He is also a member of several boards of directors, and worked to ensure federal government investments to support Black communities in Quebec as part of the Support Black Communities of Canada initiative from Employment and Social Development Canada. He helped secure a $351 million investment by the government, financial institutions and partner organizations to support Black entrepreneurs through the Government of Canada’s Black Entrepreneurship Program. He is the co-founder and chairperson of the F.A.C.E. Coalition, an entity responsible of the delivery of the loan portion of the program.

Hilina Hitimana lived and studied in different countries around the world and immigrated to Canada in August 2006 as an international student. She completed her master’s degree in dental sciences at McGill University in May 2009. She worked in dental public health research but always aspired to work in a clinical setting and to address the social barriers related to access to dental care. She became a dental hygienist, with much of her career focusing on prevention of oral diseases, oral health education and behavioural change. She aspired to work for herself, and when Quebec finally announced the independence of dental hygienists in September 2020, she took steps to create a clinic that would address the disparities in access to dental care. Her Montreal-based clinic, Clinique Belle Heritage, is committed to providing accessible, affordable and quality dental hygiene, with the aim of promoting quality of life through dental health.

Alecia Aquino is a Director of Commercial Financial Services Strategy at RBC Royal Bank. She leads the Business Owner Succession Planning, Women Entrepreneur and Black Entrepreneur Program strategies. Over the course of her 30 year career at RBC, Alecia has held a number of senior positions, including Client Strategy, Retail Products, Information & Insights and Operations. Alecia is a passionate advocate for diversity and inclusion and believes in enabling a work culture where every employee feels heard, empowered and enabled to be successful in their role. A believer in the impact of mentorship, Alecia supports coaching in and outside of her team to share experiences to support the career development, while learning from the perspectives of future talent.

Carl-Edwin is a tech and video game enthusiast. He is the founder and CEO of Northern Arena Productions, a TV and interactive production company, and Northern Arena inc., one of Canada's biggest esports tournament organizers. He is also the owner of esports team Mirage and the creator and executive producer of the Canadian Game Awards. Carl-Edwin Michel has also been reporting on the technology and gaming industry since 2009 as a freelance journalist, lecturer, radio host and TV personality.