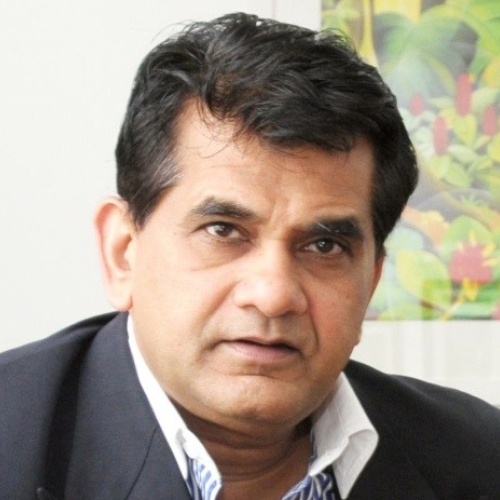 Mr. Amitabh Kant is presently CEO of National Institution for Transforming India (NITI), which was formed on January 1, 2015. NITI  is the premier policy ‘Think Tank’ of the Government of India, providing both directional and policy inputs. While designing strategic and long term policies and programs for the Government of India, NITI Aayog also provides relevant technical advice to the Centre and States.

He is a member of the Indian Administrative Service, IAS (Kerala Cadre: 1980 batch). He is the author of Branding India - An Incredible Story. Mr. Kant has been a key driver of the “Make in India”, Startup India, “Incredible India” and God’s Own Country” initiatives that positioned India and Kerala State as leading manufacturing and tourism destinations. These campaigns have won several international awards and embraced a host of activities – infrastructure development, product enhancement, private-public partnership and positioning and branding based on extensive market research.  Mr. Kant also conceptualized the “Atithi Devo Bhavah” – “Guest is God” campaign to train Taxi Drivers, Guides, immigration officials and make them stake holders in the tourism development process.  Mr. Amitabh Kant was also the National Project Director of the Rural Tourism Project of UNDP which made a paradigm shift in spreading tourism to Indian villages which had core-competency in handicrafts, handloom and culture.

In his capacity as Secretary (Industries) Govt. of India, Mr. Kant drove the Ease of Doing Business initiative and ranking of States on outcome parameters. He is the Chairman of the Committee to implement Digital Payment in India.

Mr. Amitabh Kant did his schooling from Modern School, Delhi, graduation in Economics (Hons) from St. Stephens, Delhi University and M.A from Jawaharlal Nehru University. He is a Chevening Scholar.