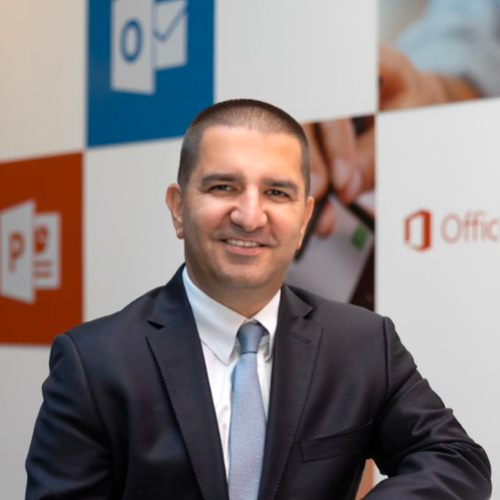 R. Erdem Erkul is a Turkish IT manager. He served as the Deputy General Manager of Public Sector and Public Investments at Microsoft Turkey. At the same time, he was elected Vice President of the European Professional Informatics Associations Council headquartered in Brussels. He served as Vice President of International Relations and Board Member at Informatics Association of Turkey between 2011-2015. Erkul is known for his work on e-government, mobile government, new public administration, Web 2.0 and e-participation, social media, public policies and entrepreneurship. R. Erdem Erkul completed his PhD at Ankara University, Faculty of Political Sciences, Department of Political Science and Public Administration. He completed his pre-doctoral education at Hacettepe University Political Science and Public Administration and also at Massachusetts University Political Science and Public Administration departments. During the academic years of 2008-2009, he worked as a doctoral scholar at the National Center For Digital Government which founded as a result of a project at Harvard University and operating under the directorship of Professor Jane Fountain. Erkul attended the Economic Development Program for Innovation at Harvard University's John F. Kennedy School of Public Administration in June 2013. Throughout the program which chaired by Prof. Calestous Juma, he worked on Public Policies, Innovation and Entrepreneurship. In 2005, he founded the e-government and informatics portal www.digitaldevlet.net. He is currently the editor of this portal. In 2005 and 2006, he worked as a coordinator in Total Quality and Strategic Planning studies at Hacettepe University. www.digital-government.net, the international e-government portal in 2008, was archived on the Wayback Machine site on 25 July 2020.He set up the web page. Public Camp held in 2011. He was the chairman of the Organizing Committee of this event in Turkey. Between 2010-2013, he worked as the Director of Public Affairs, Academic Programs and Social Responsibility Programs at Microsoft Turkey. He served as Microsoft Middle East and Africa Regional Planning Director until August 2014. Dr. Erdem Erkul has served as Director of Public Sector & Foreign Relations and Strategy Officer and Country at Samsung Electronics Turkey and spokesman for the country. And then, he began his new duties at Microsoft Turkey as Executive Vice President of Public Sector and Public Investments. Civil Society Activities have a very important place in R. Erdem Erkul's life. Elected as Vice President of the European Council of Professional Informatics Associations headquartered in Brussels in November 2014. He represented the Informatics Association of Turkey in the Council of European Professional Informatics Societies since 2010. Erkul is a jury member and content consultant at ‘’e-tr awards’’ which organized in collaboration with TUSIAD and Informatics Foundation of Turkey. He is a member of the American Scientists Association (TASSA). Erkul is an unofficial expert committee member at the European Commission Information Portal. Since June 2012, he has been in the editorial team and main evaluator team in the "International Journal (epractice)" of the European Commission Informatics Portal. Erkul, is also Turkey Informatics Foundation executive committee members. He gave TEDx speeches on the development of technology in Turkey and the social transformations it has created. He has written articles for various business and technology journals such as Harvard Business Review. He received the TUSİAV the Most Efficient Professional Manager Award in 2017. He plays lute and reed as an amateur.