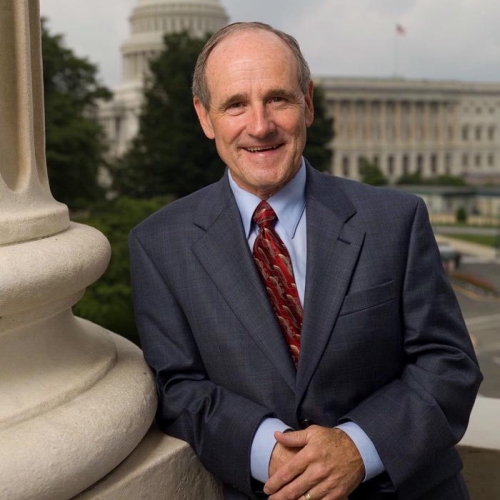 Jim Risch, currently serving a second term as Idaho's 28th Senator, holds a longstanding commitment to public service and a passion for good government. Known for "pragmatic decision-making," Risch is what his peers call a "no-nonsense, get-the-job-done leader" with more than four decades of experience in elected office. He has been recognized by the National Journal as the “Most Conservative” Senator in the United States Senate for two years in a row.

He serves on five committees important to Idaho and our nation. As Chairman of the Senate Committee on Small Business and Entrepreneurship, he advocates for small business growth and reducing regulations. He also serves on the Energy and Natural Resources Committee, giving Idaho a continued voice in legislation that dramatically shapes the West. Risch's other committee assignments include the Committee on Foreign Relations, Select Committee on Intelligence, and Select Committee on Ethics.

During his service as Idaho's 31st governor, Risch lowered property taxes by 20 percent providing much-needed tax relief to Idaho taxpayers, while setting aside $100 million in a rainy day fund for schools. He also designed a plan to manage Idaho's roadless areas and supervised the adoption of a rule that effectively prohibits the construction of traditional mercury-releasing pulverized coal power plants. Both measures earned Risch bipartisan acclaim for his pragmatic approach to natural resource issues and land management.

As governor, Risch also accomplished a number of initiatives to create a streamlined and effective government. He transformed Idaho's executive office by opening regional offices throughout the state, enhancing communication and responsiveness to Idahoans. Risch also succeeded in a major reorganization of Idaho's Department of Health and Welfare that allowed for more efficient administration and cost savings.

As a twice-elected lieutenant governor, Risch earned a reputation as an advocate for smart economic development. He continues to work with businesses-new and old alike-to ensure continued prosperity for the people and places of Idaho.

Senator Risch began his career in public service at the age of 27, when he was elected to two terms as Ada County prosecuting attorney. Following his tenure as president of the Idaho Prosecuting Attorneys Association, he served 11 elected terms in the Idaho State Senate. His time as senator was highlighted by his quick election to the leadership positions of majority leader and Senate president pro tempore, serving in the top two positions of Senate leadership for 19 of his 22 years.

Senator Risch and his wife Vicki have been married for more than 40 years. Their commitment to Idaho and their work together earned them the distinction of being selected as Idaho's Healthy Marriage Ambassadors in 2007. They have three married sons and six grandchildren. They live on a ranch outside of Boise and maintain an apartment in Washington, D.C.